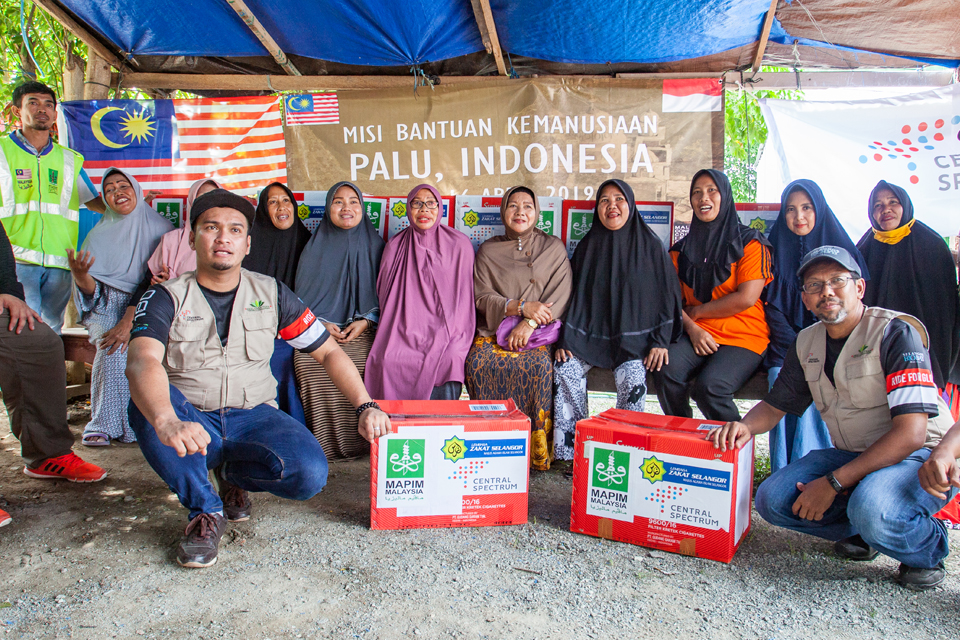 On April 11, 2019, Central Spectrum’s Amal Care Team led by Wan Mazri together with volunteers from MAPIM embarked on a 5-day humanitarian mission to distribute care packages (sembako) to victims of the devastating earthquake and tsunami that pulverised Palu, Sulawesi on September 28 last year.

The magnitude 7.5 quake was located 77 km (48 mi) away from the provincial capital Palu and was felt as far away as Samarinda on East Kalimantan and also in Tawau, Malaysia. A localised tsunami struck Palu, sweeping shore-lying houses and buildings on its way. The combined effects of the earthquake and tsunami led to the deaths of an estimated 4,340 people.

Sembako is an abbreviation of sembilan bahan pokok which originally means the nine basic foods consisting of rice, sugar, cooking oil,biscuit, tea, wheat flour, cup sardines, coffee and salt. Essentially a care package made up of basic necessities. The packages that were distributed were made possible by contributions from Central Spectrum, MAPIM and Lembaga Zakat Selangor. 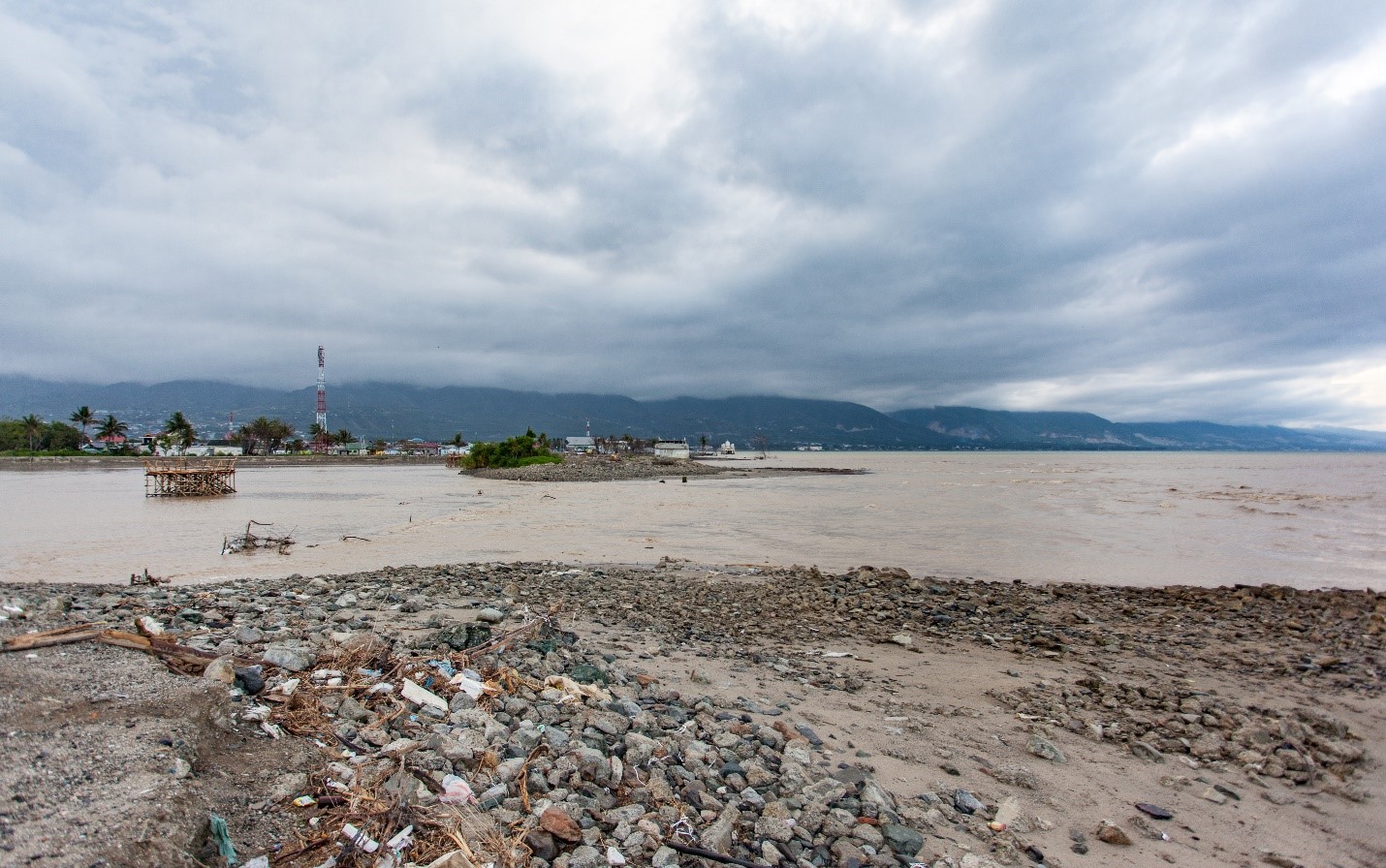 Upon arrival at Palu, the team visited locations that were devastated by the tsunami. The panoramic Talise Beach in the east district of Palu was once a thriving tourist destination but the tsunami left very little standing. The beach stretches from the town of Palu to Donggala and was the first place the tsunami hit. Visitors now describe it as a “dead” place, the beach where thousands of partygoers drowned as they celebrated the 40th anniversary of the town. 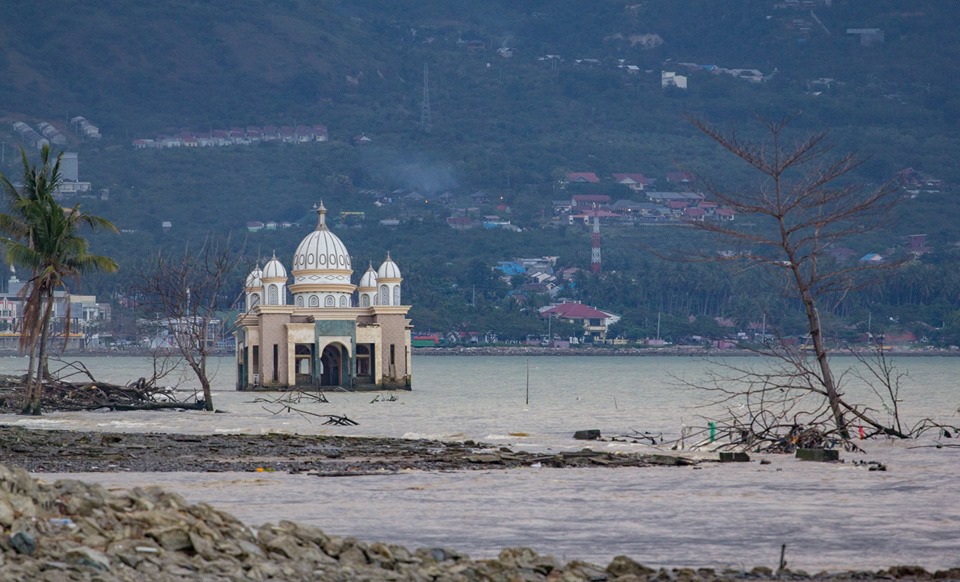 Not far from Talise Beach, the team visited the iconic “Floating Mosque”. It is actually two mosques – Alkhairaat Mosque and the Arkham Babu Rahman Mosque that is known as the Floating Mosque. Its structure dominates Palu Beach where once a dramatic walkway connected the shore to the mosque. However, the tsunami cut off access to the mosque and it now lies partially submerged in the water but structurally intact.

Next on the agenda was visiting what was once the third longest arch bridge in the world and Indonesia’s first arch bridge, the Ponulele Bridge. The once majestic M-shaped arch bridge stretched over the river mouth in the Gulf of Palu connecting East and West Palu but it now lies broken on its side in a watery grave.

Later, the team headed on to Tondo Port and what was once a fishing village, Mamboro in East Palu is now completely flattened by the tsunami. It was reported that even a huge crane at the port was swallowed by waves reaching as high as 10 meters tall.

As somber as the first day in Palu was, the following day was even more sobering when the team went to Petobo, a sub-district in southern Palu and the village of Balaroa. These two locations are actually quite a distance from the coast. Most of the 700+ houses in the district was destroyed. Out of 13,000 inhabitants in Petobo, it is believed more than 6000 were buried alive by the mud. Survivors recalled that the ground turned into quicksand and hundreds of houses sank into the soil and hundreds of people drowned in the mudflow.

Most of the village in Balaroa was wiped out as the ground collapsed, it is estimated practically all of the village’s 1,747 houses sank into the mud. 600 of its 2,000 inhabitants are known to have died while more than a thousand are still missing. The liquefaction reportedly shifted an area of 47 hectares, roads become twisted as a result of it and houses were reported to have spun and crashed against each other.

Soil liquefaction occurs when a saturated or partially saturated soil substantially loses strength and stiffness in response to an applied stress such as shaking during an earthquake or other sudden change in stress condition, in which material that is ordinarily a solid behaves like a liquid.

The liquefaction in these two locations are considered the largest in the world and extremely rare.

While visiting Petobo and Balaroa, the team met with survivors and presented them with contributions. Later that day, 100 packs of food was distributed in a special program with children who survived the disaster.

The following day was spent visiting MAPIM’s halfway house project HUNTARA (Hunian Sementara) as well as visiting survivors in Donggala. Waves at a height of more than 7 meters struck Donggala and destroyed nearly all coastal homes. Some are believed to have been submerged nearly 35 metres deep into the water. Authorities report that more than 150 people were killed here in the tsunami.

The team distributed another 132 packs of food, talked with survivors and entertained the children.

Before returning home, the team visited Sibalaya in the Sigi Regency and Jono Oge village, two locations where the earthquake and liquefaction caused the most devastating damage and claimed the most casualties. Eyewitnesses said that the amount of liquid that was released by the soil was so immense that buildings and structures were swept away. In Jono Oge the village shifted 3km from its actual position.

The Amal Care Team from Central Spectrum decided to embark on this humanitarian mission to help beyond borders the victims of this devastating earthquake and tsunami. Apart from the gut-wrenching exposure to the severity of destruction and hardship the community in Palu has been subjected to, this mission was also an opportunity to forge good relationships with other NGOs.

A famous quote by Robert Ingersoll says “We rise by lifting others.” This is what…

“Believe in us and we will make your dreams come true,” said Ruzita Mohd Taib,…

Capitalizing on the upward trajectory of the halal market, Central Spectrum recently participated in the…